The LC201Ag1 electrically conductive ink can be used to create large flexible circuits to which components like LEDs can be attached. In this demonstration, an LED light strip is created with the Ag1 ink for bus bars and component pads. A combination series and parallel LED array is chosen to create a uniform, low resistance current path to each LED. 10 segments of 4 series LEDs are connected to create a nominal 12V lamp with 40 white LEDs.

This design was completed using a free, open source, vector drawing package, Inkscape. This software is highly recommended for printed electronics. It is important to accurately specify the color of each design layer such that proper electric functionality is achieved. Other design software can be used such as ECAD. It is recommended to convert gerber, dxf, pdf and other file formats to svg and specify the printing color of each layer.

Typically US Letter page size is selected. Substrates with size US Letter are readily available. As such this substrate is limit to 8.5inch by 11 inch image area. However, it is recommended to limit the maximum image size to 5inch by 8inch for best multiple pass alignment.
In the Light Strip design US Letter is selected and the image size is smaller than 3inch by 4 inch (actually 65mm by 100mm). The design is drawn in metric units. 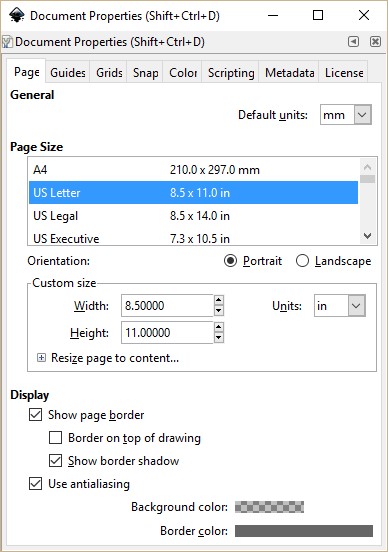 On the Board Outline layer a rectangular cut out of 65mm by 100mm is drawn. This layer will be used to specify the cut path when trimming the lamp from the full page. 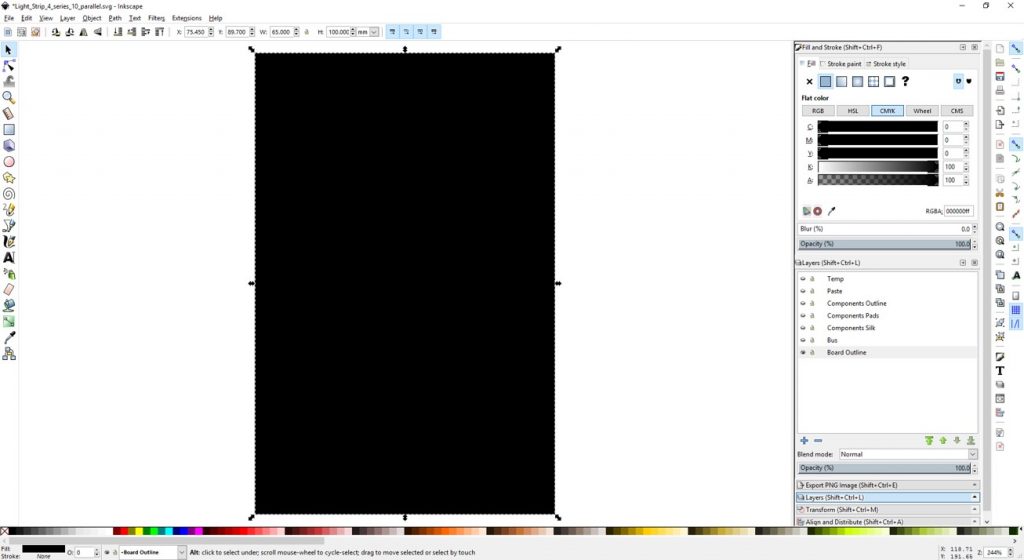 The conductive circuit is drawn in yellow color which will be printed as the conductive Ag1 ink. The drawing include ring features for alignment at the corners. It also has an arrow to indicate the print direction which is used to orient the page for multiple print passes. The positive bus bar has plus sign indicators. Whereas, the negative bus bar has minus sign indicators. 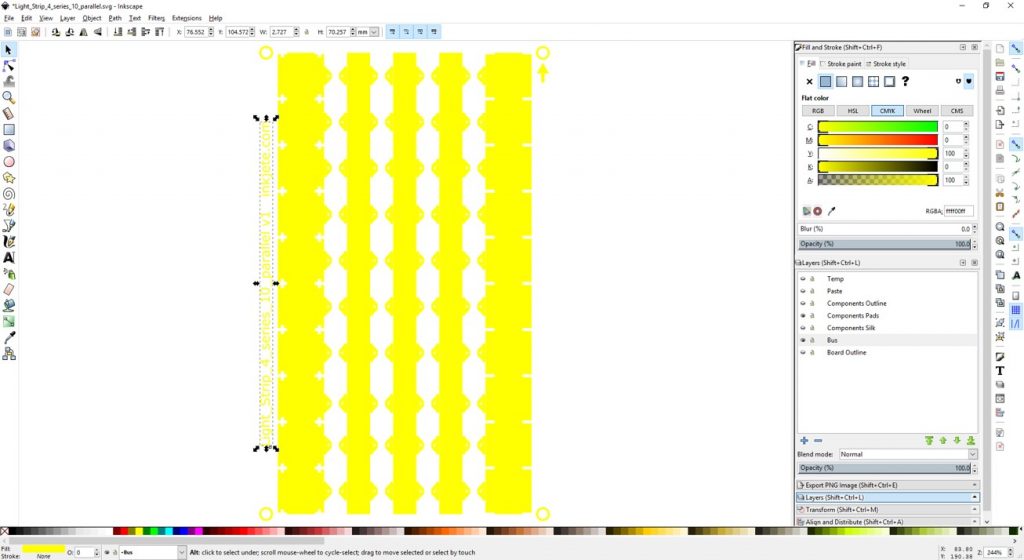 The legend layer, also called a silk screen layer in conventional circuit boards, is drawn in magenta color which will be printed with the non-conductive magenta ink. This drawing provides visual indication of the LED orientation. 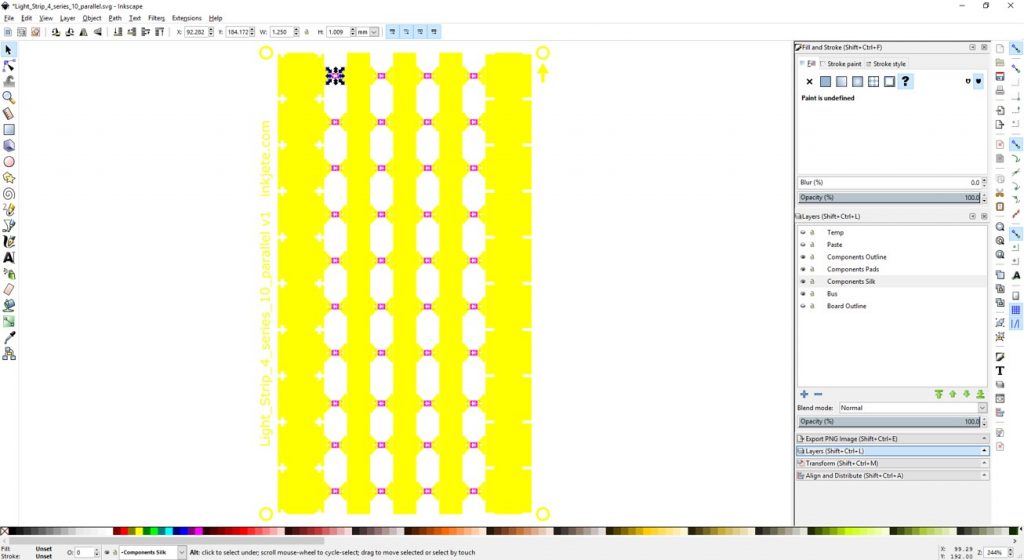 The paste layer is not intended to be printed. Instead this layer will be used to create a stencil. The stencil is used to print conductive epoxy to attach the LED components to the printed circuit. 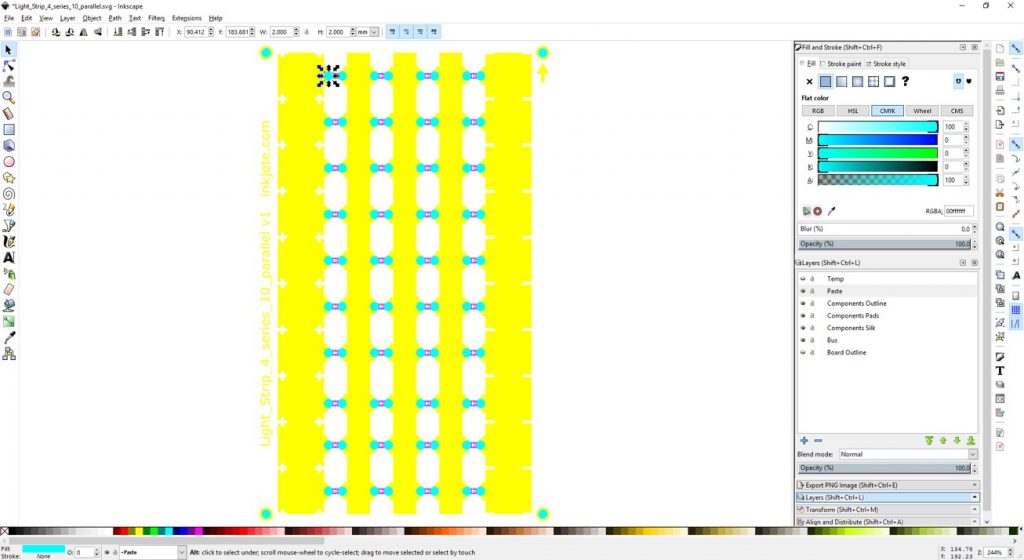 Below is the composite drawing with all layers visible. The board outline is drawn in black which is in the background. The other layers are in the foreground. Each layer will be processed individually by hiding the other layers. 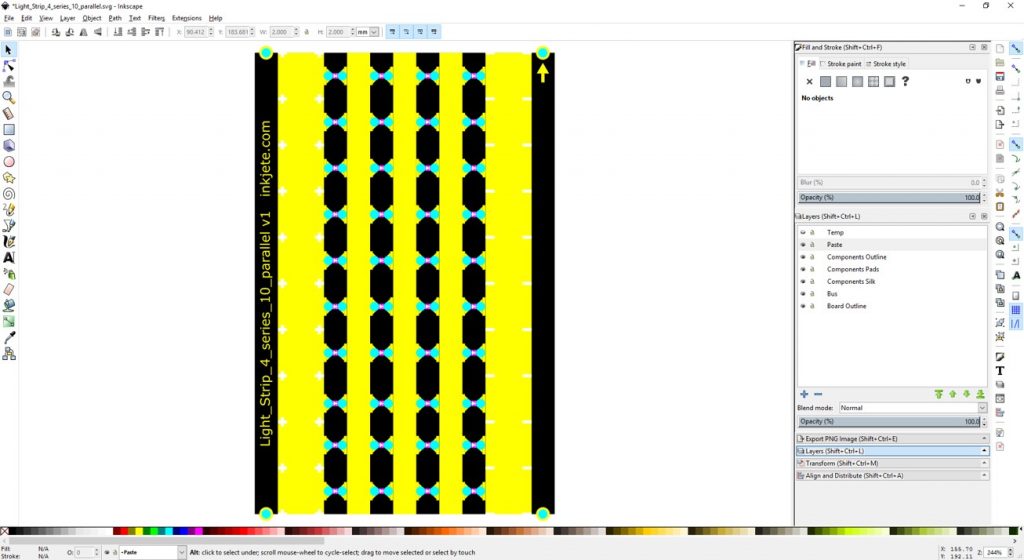 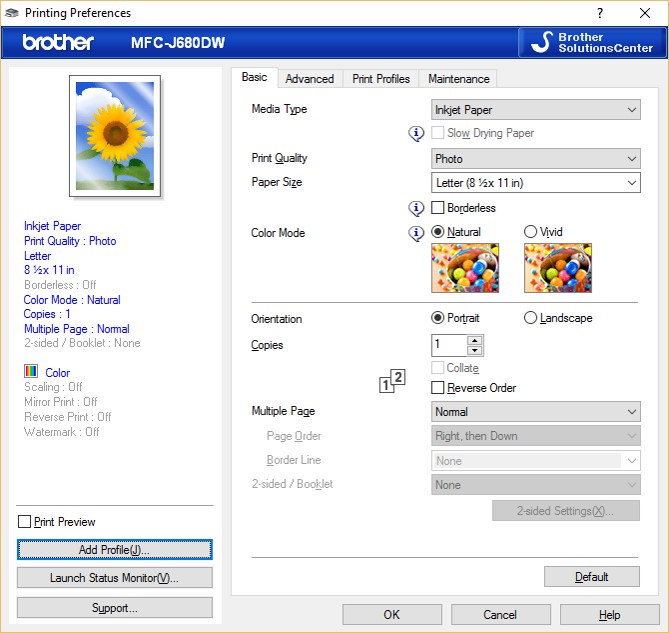 The substrate is placed face down in the tray. Then proceed to print the first pass. 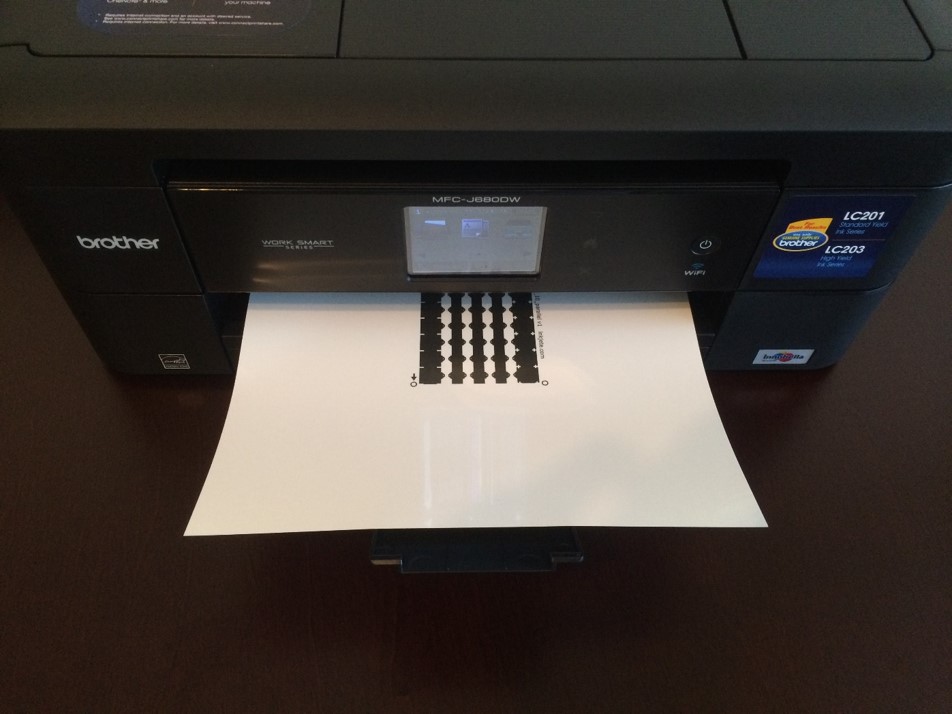 Place the substrate again in the tray face down. Note the print direction arrow and orient it pointing out of the tray and into the printer. Print the second pass. 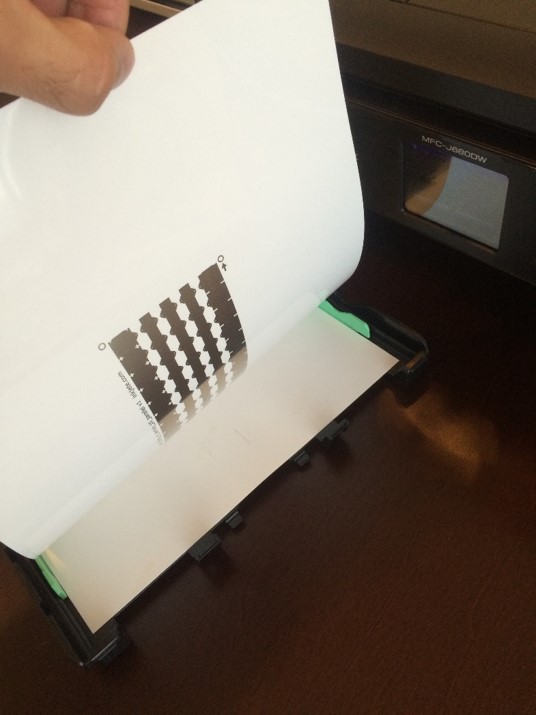 In most applications two passes of the Ag1 ink are sufficient conductivity. For demonstration purpose a third pass is printed. During this pass both the conductive and legend layer are printed. The legend is printed with magenta ink. 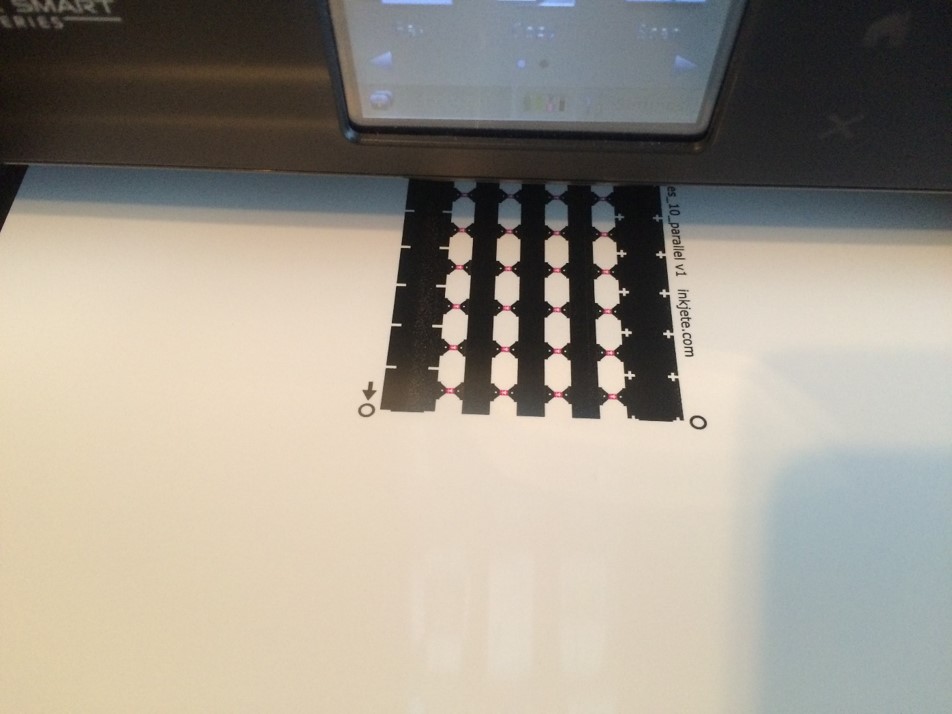 The print circuit is complete. Note the texture surface on the negative bus bar and some linear scratches above the lower right component pads. These defects can occur during the multiple passes. Often these defect occur during the first pass. Typically a second pass can correct the conductivity issue. Sometimes the repeated handling of the substrate during three passes causes additional damage. Usually the defects are cosmetic, and the circuit functions properly. 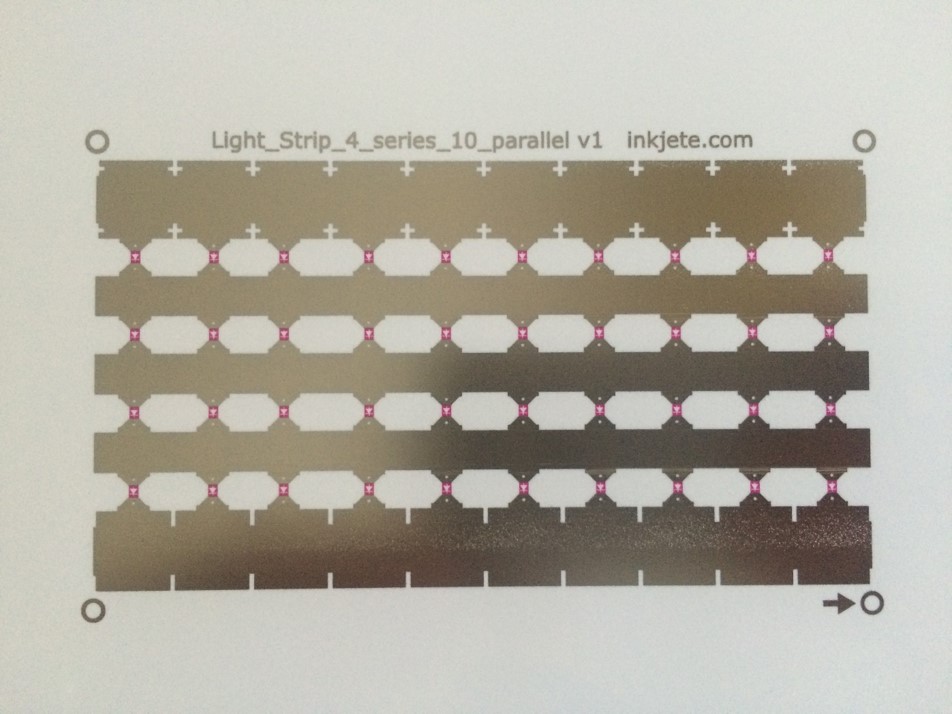 LED components are attached to the printed circuit with conductive epoxy. The epoxy is printed onto the circuit with a stencil to define the pattern. An inexpensive stencil is created by cutting a thin 0.005inch thick transparency film. In some applications a thicker layer of epoxy is required. For instance if the circuit will be flexed aggressively additional epoxy is necessary to securely hold the components. Alternatively, the components can be potted with non-conductive epoxy or even laminated for a more rugged assembly.

The LEDs are contained in a cut tape carrier. Secure the carrier with double sided tape to the print substrate. Orient the LEDs by polarity to match the circuit. For these components the holes in the tape carrier are on the negative terminal side of the LED. 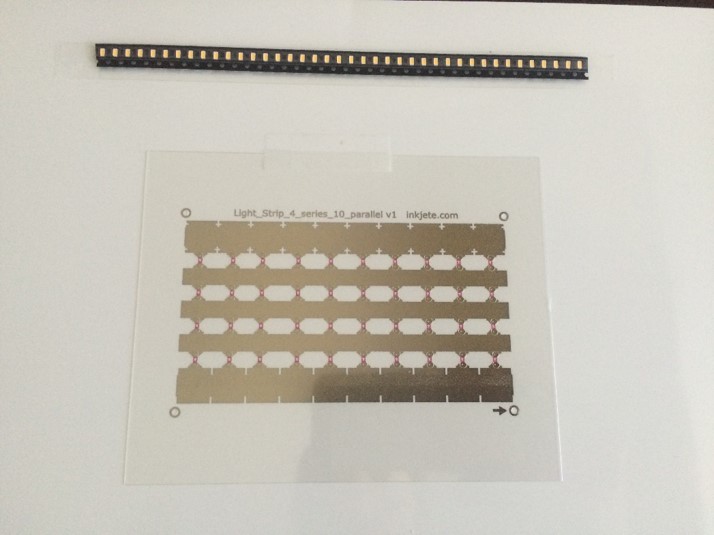 Deposit a thick bead of epoxy along the long edge of the circuit. For 2-part epoxy ensure the material is properly mixed. If epoxy in the corner alignment holes is not desired, do not spread the epoxy bead past the holes. 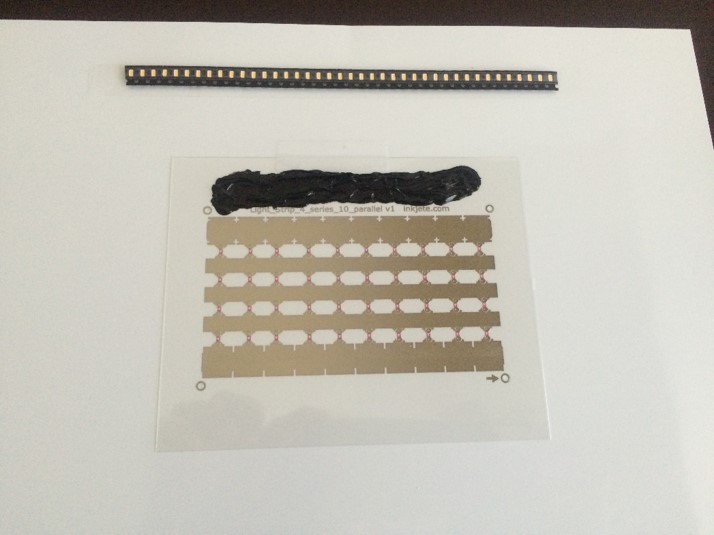 Print the epoxy with straight edge or squeegee. Two passes are usually sufficient to fill the holes. This design has 2mm diameter holes. If larger diameter holes were used, more than two passes might be required. Alternatively, a better design strategy would be to create multiple smaller holes instead of a single large hole. Also if epoxy in the corner alignment holes is not desired, take care when printing not to pass over the holes. 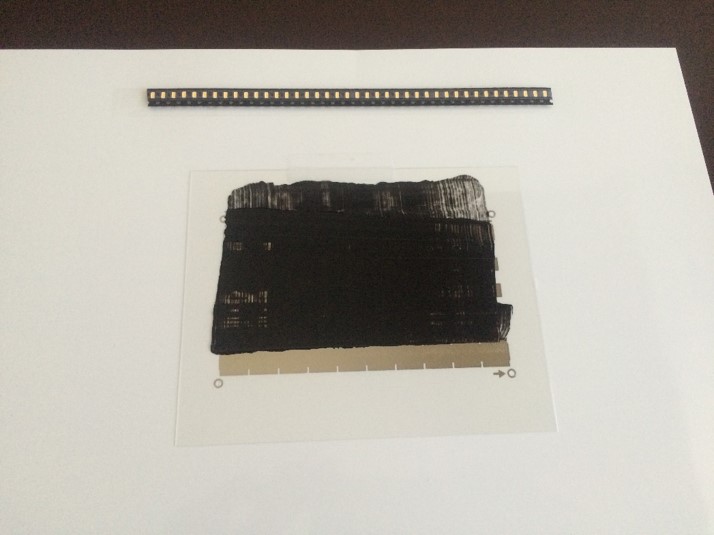 Carefully remove the stencil. Note that in this example two of the epoxy dots in the upper right corner were smeared when removing the stencil. 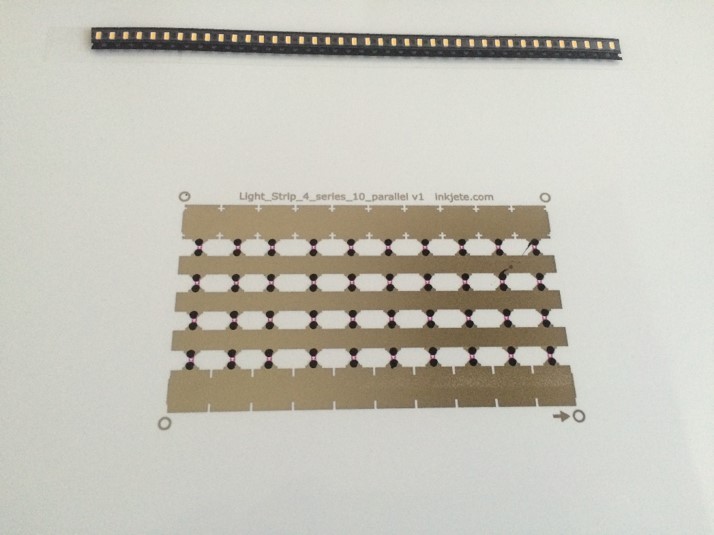 Quickly place the components before the epoxy hardens. Many epoxies have a work life of a few hours. With practice the 40 LEDs can be place in a few minutes. Take care not smear the epoxy. And maintain the proper orientation of the LED. If the LED component is accidentally dropped at rotated, check the polarity feature looking through a magnifying lens to correct the orientation. After each component is aligned and placed, gentle push downward to set the terminals into the epoxy. 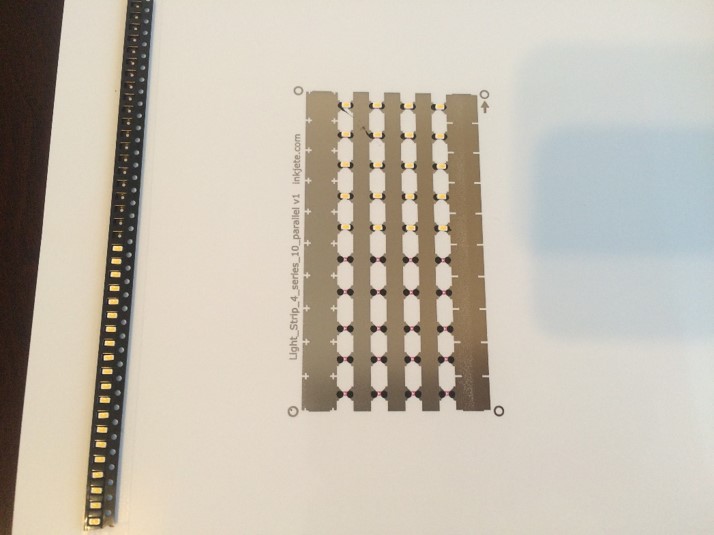 The 2-part epoxy used cures at room temperature within 24hrs. Allow the completed assembly cure overnight before the power is applied or flexing the circuit. 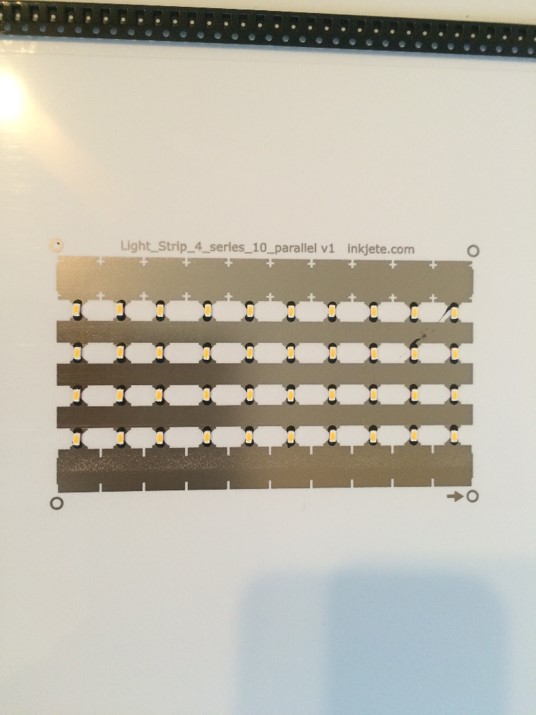 After the epoxy is cured, power can be applied. Connect a 12V source. The lamp will start lighting with at least 10V. 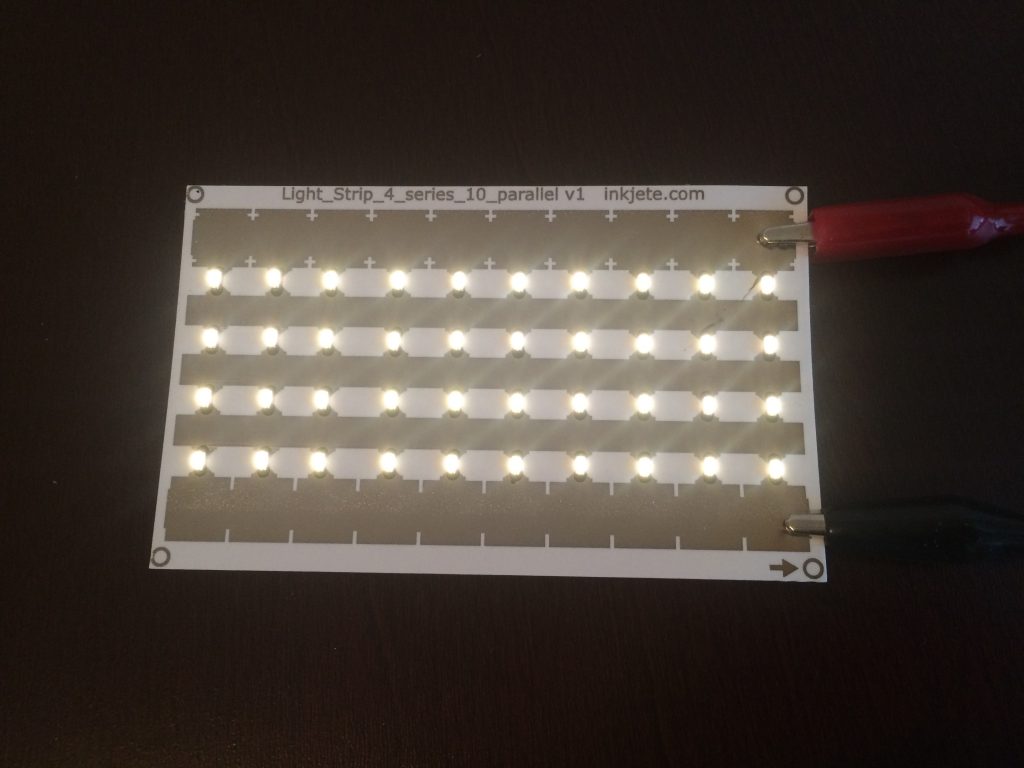 The printed circuit is flexible. It bends easily by lifting one corner. 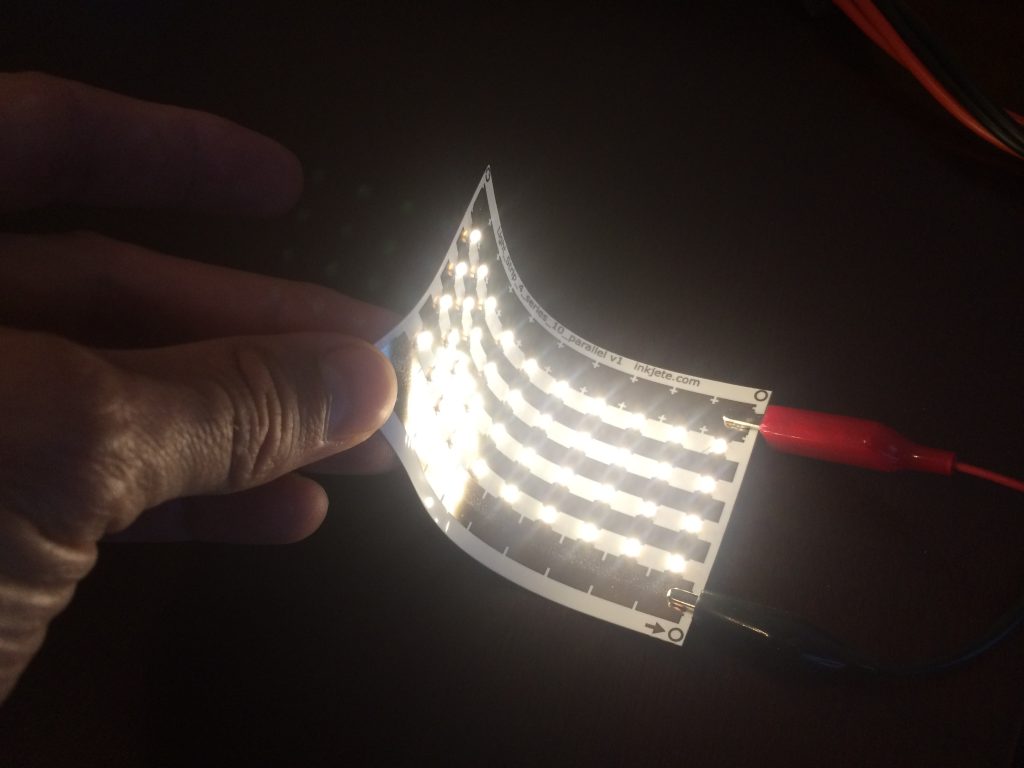